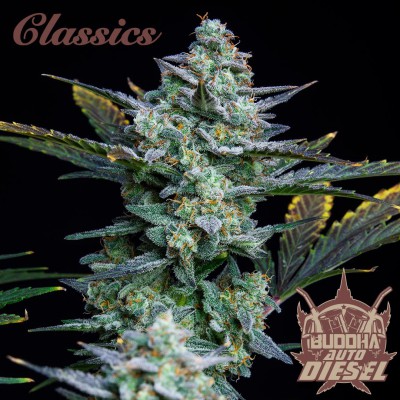 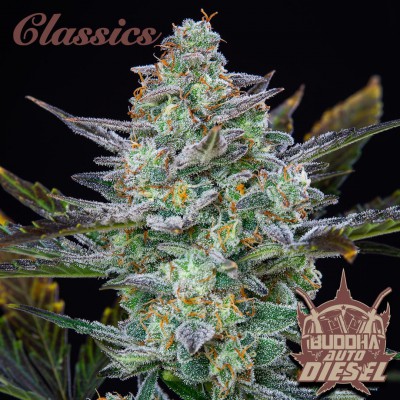 Breeder: Buddha Seeds
An essential modern classic that set a benchmark in the flavors of cannabis. The mystery surrounding Diesel's origins remains unsolved among the most experience
$7.73

An essential modern classic that set a benchmark in the flavors of cannabis. The mystery surrounding Diesel's origins remains unsolved among the most experienced growers, fulfilling the charm of a fascinating story. However, all the stories converge on the same person: Chemdog, author of this classic.

We have to go back to the 90s in the USA to locate the origin of this globalized variety. Chemdog bought some cannabis flowers, at a Grateful Dead concert, in which he found a few seeds that eventually became the origin of what is now Diesel. Over the years, it has become a standard variety among growers, and there are already countless cups won in competitions all around the world.

Therefore, from Buddha Seeds we have not hesitated to include it in our catalog of classics. Of course, always with the care that differentiates us, with the Buddha Seeds quality seal.

As a result of our breeding program, with Buddha Autoflowering Diesel by Buddha Seeds we have increased and stabilized production to unsuspected limits in a variety that lacked it. At the same time we wanted, and we managed, to keep the phenotype variation with lots of nuances in the flavors that defines it and for which it has been used in thousands of development programs.

Buddha Autoflowering Diesel by Buddha Seeds is suitable for anyone; it does not require much care, andis addressed to those who have less knowledge about the cultivation of the plant. In addition, it adapts well to adverse weather situations.

In summary, the parents of this classic by Buddha Seeds make it a really attractive plant, with productive results, especially in mother earth crops, with aromas and flavors attractive to the most demanding consumer. ¡A delight that cannot be missing in your garden!

KARL
thankyou for this years seeds they were all good im looking forward to nex...

patrick labrot
this spring i ordered seeds from this site (all feminized and cups winners) i was very deceived than...
Please log in to write a review.
Last Updated Was Exactly: Monday, 18 October 2021 03:20