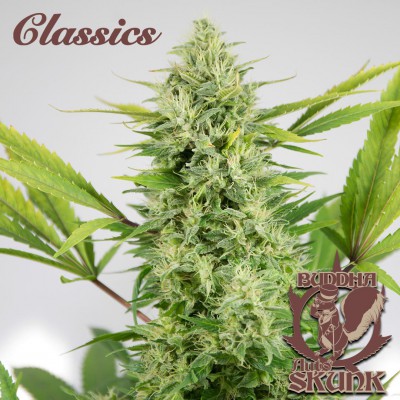 Breeder: Buddha Seeds
Skunk is to be one of the most recognized hybrids by growers. This commercial fame has been earned, in part, by its correct nomenclature since Skunk specimens e
$7.26

Skunk is to be one of the most recognized hybrids by growers. This commercial fame has been earned, in part, by its correct nomenclature since Skunk specimens exude a very characteristic sweet aroma.

The Skunk story has enough material for a television series. One of the protagonists of the creation of this classic is the breeder Sam 'The Skunkman', who, with a group of partners, wrote the firstlines of the legend.

The situation in the United States was delicate, as constant political pressure against drugs was common. Therefore, Skunk had to make the leap to the European continent, in search of an opportunity. And he did not lack time to find it, since it was transferred to a prestigious Dutch seed bank.

From Buddha Seeds we have not hesitated to include this variety in the collection of classics with our own touch, paying tribute with Buddha Autoflowering Skunk. Our team has managed to maximise the most attractive aspects that growers of this genetics like so much.

The characteristics of Buddha Autoflowering Skunk are summarized in: it is a predominantly sativa hybrid, with stable uniformity, strong, powerful and productive. The flowering time is short, especially considering the result of the final harvest. It is advisable to eliminate odors in indoor crops with anti-odor filters, since their presence is notorious.Keep this in mind also for outdoor crops!

Sativa genetics are evident in every Buddha Autoflowering Skunk individual. It stands out for its beautiful aspect, formed by prominent calyxes and abundant pistils that make up voluminous buds. The effect is of a true sativa: pure cerebral energy that will facilitate creativity, good social vibes and personal vitality.

Its flavor is indiscribable. We could say that it is the flavor of marijuana par excellence! Although it always maintains the same Skunk background, it has an incredible aromatic variation that ranges from fruity citrus to sours aromas.

paul silverman
thanks very much Popular Seeds all my orders have been good better than any S...

karlo
thanks again you cant fault this site an there staff...