We have temporarily closed to new orders whilst we clear the backlog that has built up due to distancing regulations and the Easter Holidays here in the UK. We expect to re-open on the 17th April. We do apologise for any inconvenience caused. 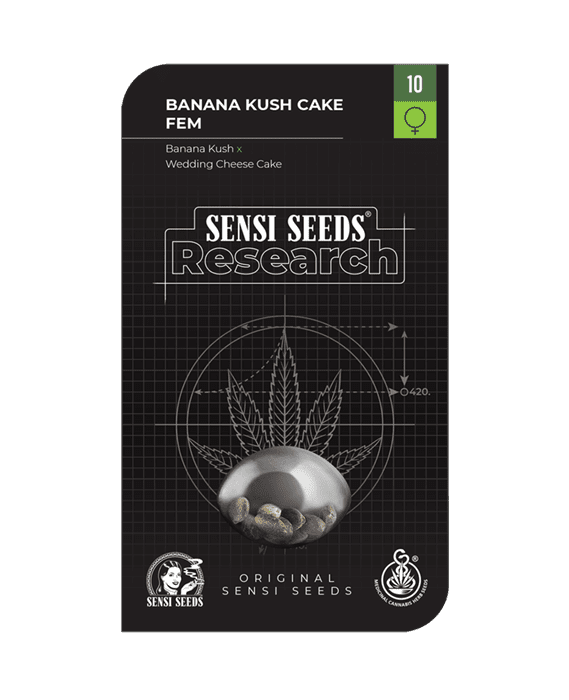 Banana Kush Cake Feminized is 65% indica, 35% sativa. It’s a new strain, created by Sensi Seeds as part of the Research project in 2021. Its hybrid genetics include Banana Kush and Wedding Cheesecake. There’s some variation in the phenotypes, which can be advantageous for experimental growers. The flowering period is seven to nine weeks, and yields are large. Banana Kush Cake grows well in temperate or continental climates.

Banana Kush Cake Feminized is 65% indica and 35% sativa. It has several different phenotype variations, and is one of Sensi Seeds’ most genetically intriguing strains, developed as part of the 2021 Research project. Its parent plants include Banana Kush and Wedding Cheesecake, both of which have impressive genetics in their own right. The strain grows to average heights, and produces a skunky, fruity aroma. The high is powerful, soothing and dreamy, with a hint of sativa buzz.

Banana Kush Cake cannabis seeds are 65% indica, 35% sativa. Plants grown from seed will produce a range of phenotype variation. Quite simply, there will be subtle physical differences between the plants, which makes this the ideal strain for those who appreciate variety.

The parent plants are Wedding Cheesecake and Banana Kush – both popular strains around the world. This is the feminized variant, which makes it easier to grow, as the seeds will not produce male plants. On average, the female plants take around seven to nine weeks to flower, though this can vary.

The 65% indica dominance means that the plants are usually compact; an advantage for those who wish to cultivate their plants discreetly. The main stems of the plants are usually sturdy and strong, with closely spaced nodes, plenty of branches, and a roughly pyramidal shape. Although the plants are small, make no mistake, they’re capable of producing prodigious yields. This is something that’s a major draw for growers.

Banana Kush Cake Feminized’s buds are usually fat, weighty and conical, with plenty of sticky resin. These buds occasionally ‘run’ to the upper stems and branches, and the flower clusters usually stay dense, rather than open. A particularly attractive feature of this strain is the colour of the calyxes, which often have pink and orange pistils as they grow.

For best results, the plants should be cultivated in temperate or continental climates, or indoors under artificial lights. Those who like to test out cultivation techniques will be pleased to note that this strain responds well to SCROG (Screen of Green), SOG (Sea of Green), and supercropping.

Banana Kush Cake Feminized offers a high that’s very indica in personality. Upon consumption, users will notice the deep sense of relaxation, combined with a hint of uplift, thanks to the sativa influence.

The scent of the plants is often pungent and skunky, with a distinct note of banana – hence the strain’s name. However, despite the skunk parentage, the smell never becomes too overpowering, which makes it a good option for those trying to grow their plants discreetly.

This fruity, dank aroma often intensifies as the plants flower. The same flavour notes are present in the taste, along with a hint of pepper, brown sugar, citrus and acrid smoke.

martin burton
Recieved my order within 5 days of ordering, second time ive purchased from site and both times serv...

Jamie Baldwin
A loyal customer you have here I have ordered from other banks but none compare to the quality of th...

Billly
Cant fault the service from Popular Seeds.com, I've used this site for the third time and each ...
Please log in to write a review.
Last Updated Was Exactly: Monday, 12 April 2021 19:12