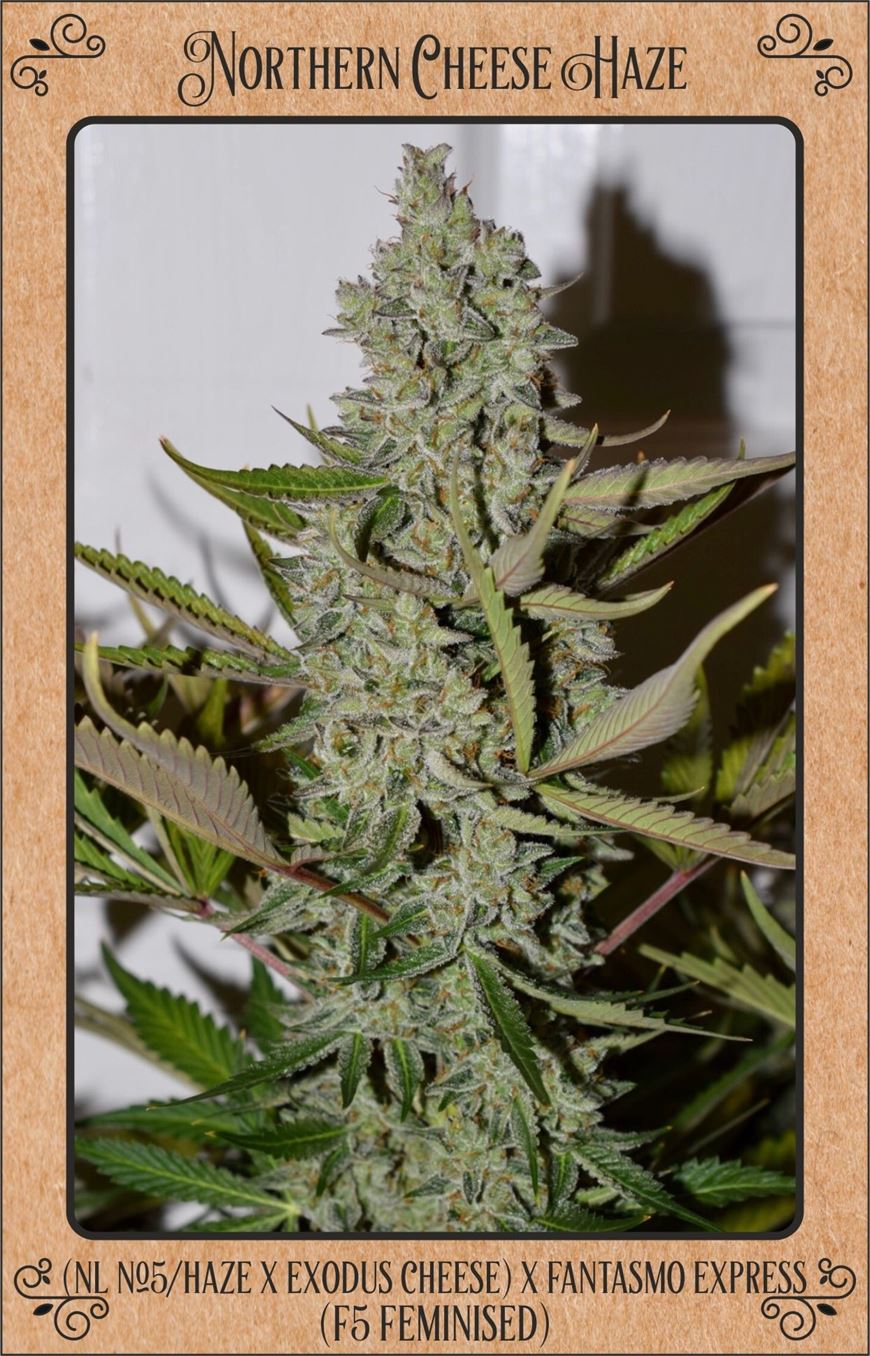 Breeder: Mephisto Genetics
Back in 2008, long before Mephisto was born, we were adding to our seed collection like crazy and came across some very interesting freebies on the site Seedbay
$16.72

Back in 2008, long before Mephisto was born, we were adding to our seed collection like crazy and came across some very interesting freebies on the site Seedbay.
These were made by a community member 'hazeseeker' and (before the exodus cheese was blowing up and being hyped) the genetics involved were the exodus cheese cut as the mother, and Northern Lights #5/haze from sensi seeds as the pollen donor. The resulting cross was aptly named 'Northern Cheese Haze', We stored away the actual seeds we'd first wanted to try in favour of immediately running the N.C.H beans.
More information can be found here: https://www.icmag.com/ic/showthread.php?t=107231  We ran them 12/12 from seed and were very impressed enough so to make F2's to tuck away for a rainy day in the future.
Fast forward to 2012 when we began experimenting and growing out too many strains to list in mass to see what diamonds we might uncover, and the N.C.H was ran again. She was an absolute beast, really verging on the line between what's comfortable to run inside - She would run 13-14 weeks in flower, which indeed is longer than most people like to venture into.
But the trade-off (as with a lot of sativa's) is that the yield was astronomical. Multiple Big long donkey dicks, with little to no training, but the indica side to her parentage ensured tight compact flowers, just on exceptionally long colas.
We selected our favourite lady from these F2 plants to keep a cut to work with. She was also trialled outside, and being a sativa hybrid (similar to amnesia in this respect) they kick into flower noticeably later, by several weeks in comparison to the indica, and OG varieties being run at the same time. This actually meant whilst everything around it was battling the late summer/early autumn storms, the NCH was unphased, and again produced massive, tall plants packed of yield.
We wanted to start exploring and adding more sativa based autos to the Mephisto Catalogue, and decided to pair our most sativa auto; Fantasmo Express to our favourite sativa leaning photoperiod: Northern Cheese Haze.
And thus began the process to turn the NCH auto.
Over the resulting generations of breeding we witnessed all sorts of phenotypes emerging, larger structures familiar to the Fantasmo and hazey elements but with looser flower structures. We shied away from utilsing those, in favour of more cheese-like compact but musky frosty buds. As with all Mephisto strains we prefer to breed for overall quality and then unique traits over outright size and yield: After all, who wants a plant rammed of flowers if the flowers aren't up to par?
The outcome may not be the most hazey affair, but overall we're very satisfied with the resulting creation and delighted to introduce her as one of our new Artisanal collection strains for 2017 - find out more below. She's also already been put to use for breeding work in a future project involving a super sativa seed club relic from holland 'Old School Haze'.
Overall we'd classify the NCH as a medium sized strain, with potential to monster at a fast rate.
Seedling growth is pretty rampant, and the NCH expresses fair sized internodal gaps and she doesn't put out much foliage meaning light penetrates through her well, which can result in a nice multi-branched plant without too much effort at all.
There's a few phenotypes within the line, some bring about fatter shorter nugs, and others with more stretch but the end result is a very similar yield and they both have in common a very compact structure resulting in firm buds and a sublime end product.
She doesn't afford too many trichomes on the fans but the flowers get quickly enveloped in a generous coating and the odor during growth is relatively low unless you set about touching and exploring a little too adventurously.
The flowers build solidly but can also make some small compact foxtails; Just something to note :)
When harvested though, even immediately if you get your nose in there you are welcomed by a beautifully spicey musky cheesey aroma.
Our Northern Cheese Haze automatic, was tested by Canna at an expo earlier in 2017 and a random bag bud came in at 21.07% Cannabinoid content, and this was from a breeding reject with no special treatment or harvest preparations or even a ripeness check.
So we think with a nice hand this variety could produce some very stellar results.
The smoke is as you would expect, powerful. A blend of day-dreamy to couchlocking goodness and packed with unique flavours.
If you want a solid strain to grow that ticks many a boxes, this has to be one to put on your grow-bucket list for 2017.

Jahmen. 420
Recieved my seeds today from bambi of lounge lizards seeds..awesome service got them sooner than exp...

Keith Lawrence
i have purchase a number of seeds form Popular Seeds i find them to be of good quality, and great cu...

Harumitsu
An incredible site. At first, I was skeptical about ordering but then decided to go through with it....
Please log in to write a review.
Last Updated Was Exactly: Monday, 18 October 2021 11:22